Interesting subjects for the blog are often daunting for me, other times it becomes apparent instantly.  When I was considering what next to share with you, the proverbial light bulb went on! It is obvious these posts are my perceptions and life experiences living in the historical town of Dubrovnik.  It occurred you might enjoy a story about my first driving experience here.

During the past four years, I have not needed a car except for a few times. When I moved to Dubrovnik, I vowed never would I drive here.  This county poses some challenges that are significantly different from my extensive driving experience in California. First, the town is located on the side of a mountain next to the sea.  Secondly, our ancestors did not allow for transport by means other than a donkey or by foot.  The horseless carriage had not yet come to fruition, therefore the very small goat paths have now become meandering and inadequate roads.  Many of these roads are former walking trails, far too close to the drop off toward the seaside, with most streets designated one way and crammed with countless parked cars.

Dubrovnik residents began their love affair with the automobile after the 1991 Homeland War.  It is my belief we have more Mercedes-Benz sedans here than in Germany.  Everyone owns a car, some more than one and the very old stone houses do not have garages.  As a result, cars parked on the road utilizing every centimeter of space, ignoring considerations such as bus stops, crosswalks and oncoming traffic flows.

Last Saturday I ultimately had to admit defeat from my adamant statement never to drive here.  Ivo and I had grown weary of soliciting relatives for use of their automobiles.  Because we are senior citizens with free bus passes, we have unlimited access to public transportation.  However, our  apartment needed a new carpet, office chair and various other large objects and we needed a car to facilitate the trip from the stores back to Cavtat.  Ivo suggested we could rent a car, inquiring if I still could drive.  Aha, a challenge!   My mind began to race and my heart was beating faster, scared silly at the thought of driving the Magistrala highway. Thus with much trepidation, I trust my chin high and fraudulently claimed, “No problem.”  I deserve an Oscar.

Ivo’s son arranged a 24-hour car rental with one of his many contacts; my only request was automatic. No way would I attempt to fumble with a manual in a Saturday morning traffic jam in town.  Friday afternoon arrived as well as a Opel SUV, which seemed the size of a Sherman tank.   Paperwork completed easily and quickly and the tank sat parked in front of our building, much of it hanging over the mini parking space.   It occurred to me I needed to get the feel of driving again; it has been two years since I had driven in California where I knew the road and my Subaru.  I suggested we drive down to Cavtat Riva hoping Ivo would not agree, but he was ready and willing to hit the road.  He suggested we take Abby, stop for a beer for him and lemonade for me. I was contemplating how a glass of wine or maybe a bottle would be better, but Croatia has zero tolerance for drinking and driving, so lemonade it would be.  So, me behind the wheel acting calm but not FEELING calm, dealing with Abby’s second car ride, slowly down the road we began.  We made it safely to the Riva, utilized the 10 Kuna parking lots and found our way to the Posveden Konaba for pizza, where we watched a luminous golden sunset. Success!

Saturday morning, at 0700 we began the 20-minute drive to Dubrovnik, my confidence now intact.   Ivo was navigator and routed our excursion so that the trip would consist of with mostly right hand turns, which made driving in traffic much easier.  We had not anticipated the crowds at the green market and had to wait to park the tank into another mini space.  We visited the fish market first, bought a kilo of fresh Cipoli for lunch, and then went on to the green market for fresh fruit and vegetables and our first strawberries from the village of Ston.  Next, to Robna Kuca (department store) found a great rug on sale, and picked up a new printer and office chair.  As we left the Gruz area, our last stop was the vet’s office for Abby’s flea meds.

It was now time for me to conquer my greatest fear: the Jadranska Magistrala (loosely translated the sea highway).  My experience of a highway would be an Interstate, often three or four lanes in each direction.  Our Magistrala is on the side of Mt.Srd, very high above town with many blind curves and consists of two small lanes with a 2-inch guard rail (ok an exaggeration).  Driving the tank south to Cavtat put us on the outside lane closest to the mountain edge.  The old town, the island of Lokrum, a gigantic cruise ship at anchor all lie below. Very scenic to Ivo who said, “Hey look!” as we begin the short one-kilometer portion of the dreaded highway. I strongly suggested  silence!  My hands gripped the wheel tightly and my palms were sweating.  My eyes focused on the white line in the middle and I held my breath.  A few minutes passed and we finally reached SAFETY, the Konavle valley with hills on both sides and I began to breathe again.

In the past three months, I have taken the bus from Cavtat to Dubrovnik many times.  I do not have a problem going into town; I always sit on the uphill side of the bus and never look at the views.  The bus trip home is also not difficult; I keep my eyes tightly closed until we reach the valley, although I am certain our driver has exceeded the 60 Kph speed limit and we are traveling at the speed of sound.

Will I drive  in Dubrovnik again? Yes, I now know I have begun to conquer my fear of heights.  Another SUV?  No, the next car rental will be a much smaller vehicle. 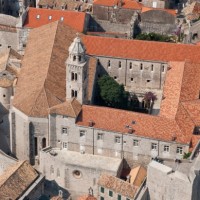 Stuff That Needs To Be Said

The Pearl of the Adriatic

Croatia, the War, and the Future

She's Clever. She's Wise. She Cares. And She's On Your Side.

Travel, Food, and Slices of Life

Wandering through Time and Place

Exploring the world with Curtis and Peggy Mekemson

A portrait of Croatia in 100 images