While watching the morning news last Saturday, I noticed several people climbing the steps just off my terrace with platters of food. Delectable aromas kept wafting into my apartment, teasing me until I remembered seeing my upstairs neighbors had posted a large Croatian bandera (flag) on their front terrace.  It announced a joyous occasion: my neighbor’s daughter, Nikolina, would be marrying her sweetheart Dubrovko that afternoon. 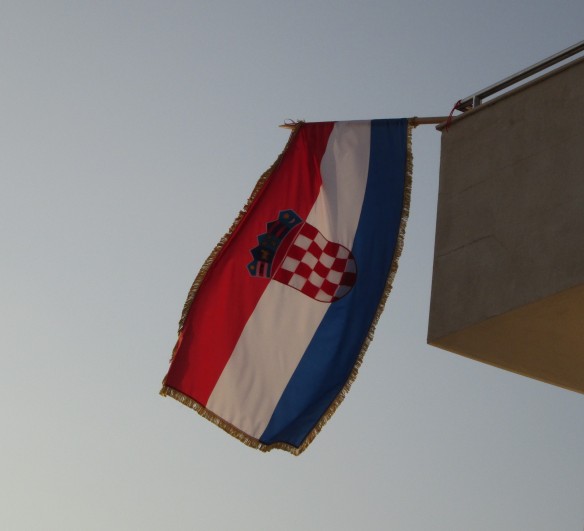 The family and friends had been coming and going all week-long in preparation for this day and in full anticipation, it had finally arrived.   Abby sat in front of the gate, not barking at all these strangers entering her territory.  Perhaps it was her hope that one of those delicious Dalmatian delicacies might drop on to her terrace which persuaded her to let the guest pass without barking.   Abby is, after all, the gate-keeper and strangers are typically required to submit to her interrogation when passing our terrace.

Friends and family began to arrive just after noon. The ladies wore their finest dresses, many adorned with five-inch high heels. The men had it easier, wearing dress pants and shirts with ties.  A trio of men then arrived, carrying musical instruments and began to play traditional Croatian love songs, many written decades prior.  As I sat listening to the music and guests singing I returned home to search for my camera.  This was a golden opportunity to photograph the pre-ceremony party on the family terrace.  It was not until late afternoon that the bride and groom departed for Sveti Anton Church (Saint Anthony) in Cavtat for the religious wedding ceremony. 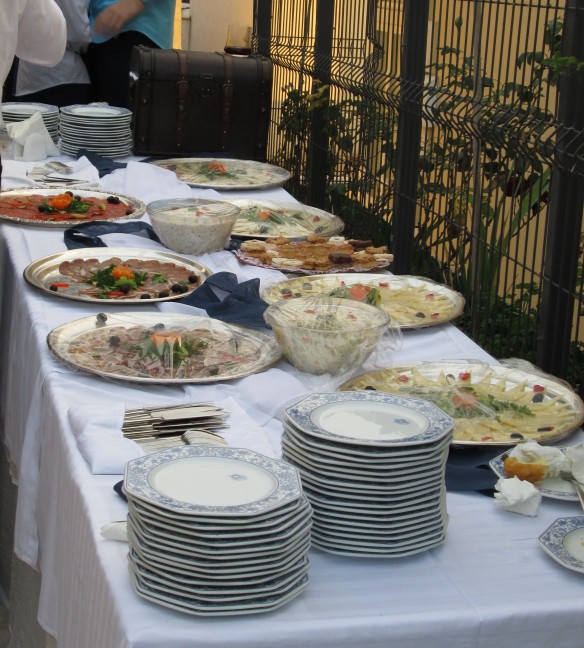 One of many tables of appetizers

It was difficult not to shed a few tears of joy as I watched the young couple reciting their vows.  However, once Antonio, the bride’s brother, began to serenade the couple, everyone was emotional.  He began with “I Give You My Heart:” and concluded with “Yours Forever”, both very old traditional Croatian songs.  Listening to Antonio sing, his golden voice filling the small church, I realized I was witnessing a gift of love between a brother and his sister, the bride. 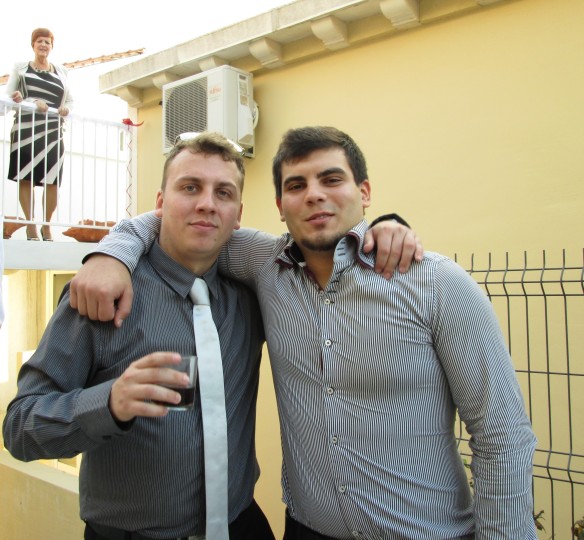 Now the caravan of guests with the traditional flower attached to the rear view mirror drove to Sava restaurant for the wedding supper.  I noticed the lead car had a young man standing proudly in the open sun roof.  He held a wooden pole adorned with red and white ribbons topped with the Croatian flag. He remained in place during the drive to the restaurant, announcing the procession of the newlyweds and their guests to everyone.

Nikolina and Dubrovko had chosen a selection of very special and traditional food for the wedding supper.  It began with platters of prust, cheese and olives; all homemade.  Next was a small cup of beef pasteta (akin to a goose liver), which was delicious.  No meal in Croatia is without a soup course and today was no exception.  Finally the FIRST main course arrived, pasticada, my all-time favorite.  I figured we were close to desert, wrong!  There was still another course; more platters arrived filled with freshly grilled veal, chicken breasts and pork slices covered with new baby potatoes.  I began to notice many of the men moving their belt buckles down a notch and I was grateful to be wearing a flowing dress.  Believe it or not, there was still more!  Plates of fresh fruit and cheese and the grand finale was the very special wedding cake. 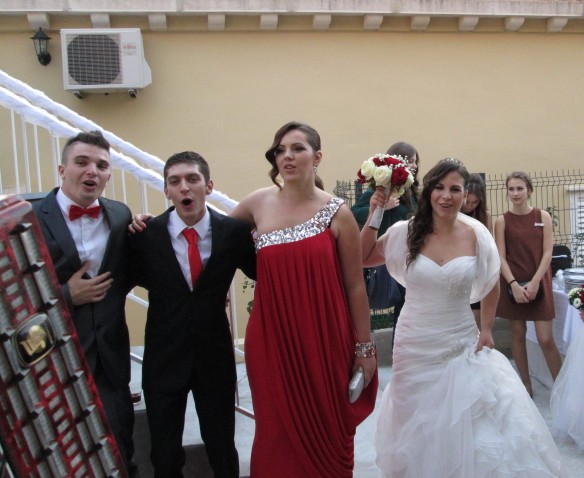 After a brief rest, the younger generation began to dance. I watched knowing that I would begin to fast on Sunday.  I left soon afterwards but learned the drinking, dancing and singing continued until the wee hours of the next morning.  Early Sunday, as I sipped my morning espresso, I heard the wedding party and family returning home.  It was only a few hours later when another parade of guests arrived with more food!  I wondered how they could eat anything more than coffee and perhaps a salad.  Two full days of festivities, great food, friends and family…what a special way to begin a marriage.  The banner, placed on the terrace to announce the coming nuptials was removed at Sunday dusk signifying the conclusion of the wedding festivities.

The Pearl of the Adriatic

Croatia, the War, and the Future

She's Clever. She's Wise. She Cares. And She's On Your Side.

Travel, Food, and Slices of Life

Wandering through Time and Place

Exploring the world with Curtis and Peggy Mekemson

A portrait of Croatia in 100 images

A blog devoted to classic films, memorabilia and more!