My new computer arrived last week. Thanks to Bob and Christine who carried it here when they visited, I am back online again with gusto!

This past week I have been attempting to learn Windows 8, with only mild success thus far. I still need to get my printer online, my large collection of new photos most definitely needs sorting, and I need to install office.

It began as a gorgeous day with an iridescent blue sky and the turquoise sea was calm and glimmering under the hot August sun. As we sat down for lunch, I noticed clouds had appeared and suddenly the sky turned dark and the thunder rolled. Torrential rains began pouring and I popped my head out the door but there was nothing to see except the mother of all rainstorms had arrived. The electricity went off and shortly thereafter an enormous blast of lightning hit our building.

In a fruitless attempt to check on any damage, I ventured out to our small terrace with trepidation. The deluge of rain was so intense I was unable to distinguish the sea nor the horizon nor even a vague glimpse of the neighbor’s red tile roof across the road. Later in the evening the electricity was restored, but there was no power to the router or the phone land line.

Our small road was flooded and few ventured out to survey damages. After several days I climbed up to my neighbors to inquire about the lightning strike. A direct hit to their small dormer had blasted several tiles into tiny fragments which were still sitting in a mess on the terrace.

We learned the storm knocked out everything in the old part of town and those repairs took priority over our small outlying area. Ten days later our phone company delivered a new router but a few hours later the television cable box failed and to Ivo’s frustration it took several more days before a replacement arrived.  Finally I checked the laptop and discovered in dismay that it was dead, dead, dead!  Yes, it had been plugged in although not turned on when the storm hit.

The week prior to the big storm during my usual Sunday evening Skype call to California, my sister had made the generous offer to replace my aging laptop. Thank you Vera and Paula! If I purchased one here I would have to special order one with an American keyboard. Did you know that keyboards are different for different languages?  Keyboards are set up so the most common letters are in positions for stronger fingers and the Croatian keyboard also has the letters that have accent marks we don’t have. Everything is different from the American format.

When I inquired about any customs duty I might have to pay when I received the box from the United States, I was advised my fees could be more than 100% of the retail value. That is typical and yes, it is ridiculous. Hmm, it was time to get creative!

I knew my nephew Bob and his wife Christine would be visiting Dubrovnik on a cruise in early October. They offered to hand carry the new laptop with my American keyboard to me, and so, the long wait began.

It was very painfully obvious that I had no way for me to communicate with my family. Our Skype sessions had to be suspended, emails went unanswered and I knew my spam folder would be overflowing.  Another neighbor very graciously offered me the use of his new laptop. Hvala Vlaho, your kindness was greatly appreciated! Not wishing to intrude on a daily basis, I limited myself to being a pest in need only occasionally to answer emails. I learned that the letters Y and Z are opposite on the European keyboard, day becomes daz! That sums up how it felt to use it.

Not having the computer resulted in some changes in my life. It gave me the opportunity to walk Abby around the neighborhood more frequently. It was good exercise for her and me and we met more neighbors, as Abby dog is the social greeter extraordinaire.  We also enjoyed many morning walks down to the Cavtat Riva, lounging at the Delpin (Dolphin) and sipping espresso savoring the bay view. I baked a ton of cookies, several batches of cranberry walnut biscotti, thumb print and various other goodies, thereby negating the benefits of the additional walks.

My evenings were spent watching television with Ivo. His primary choices, European football (soccer), basketball, hockey, handball and tennis are not high on my to do list in the first place. I watched more sports this summer than in my lifetime. Also caught up on reruns of Murder She Wrote (yes it is still being viewed here), America’s Funniest Videos and, believe it or not, Perry Mason (for those who can remember that far back). I also watched seasons 1 and 2 of The Good Wife and NCIS, my very favorite program and the inspiration for Abby’s name.  Last of all, the cartoons describe my two months best: the humor was a bit weird.

I am so very glad to have a new working computer and to be back online. The Internet opens the world so much for me and permits me the best of both worlds; the habit I built while an adult in California and the lifestyle I love here in Croatia. Now, if I can conquer Windows 8 I will be content! 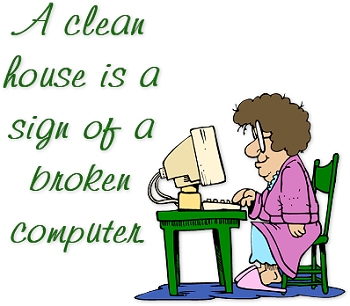 15 thoughts on “My Two Month Hiatus”

What do you think? Cancel reply

This site uses Akismet to reduce spam. Learn how your comment data is processed.