When I overheard a tourist comment to another “We were only at the Hilton to pick up a car but I thought it was a pretty standard big hotel without charm” I knew that, once again, a visitor did not understand what they were seeing.  It is time to share so you will know.

The Grand Dame of Dubrovnik, the Grand Hotel Imperial, celebrated her 116th birthday this year.  The Imperial formally opened on 29 May 1897, the first modern hotel in Dubrovnik.  It offered state of the art technology with electric lights, central steam heating, bathrooms with hot and cold running water and an electric lift.  There was a reading salon and card room and a special hall for the ladies.  The restaurant also featured service by a professional qualified staff, a new concept.  At that time the hotel only had two floors and a total room count of 70.  The Imperial was built uphill from the Pile Gate to the old town, behind a grand public park known as Teodorina Gradina (Theodora Hill Fort).  Local residents were vocal about the location of the Imperial as they feared the park would be fenced off, which proved to come true. 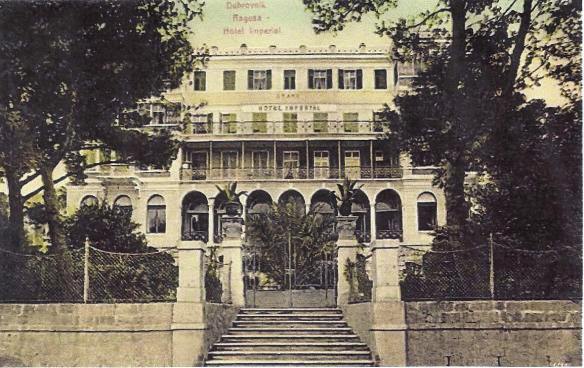 This was the beginning of modern tourism for Dubrovnik and a hotel was needed.  One of the local papers wrote “These days Dubrovnik is overrun with foreign travelers.  With such an onrush of foreigners (we shall not exaggerate if we say that 300 to 400 of them arrived and left this week on special steamers, mostly staying for one or two days).”  It is interesting to note that high season was winter, unlike today. It is also interesting to note that 300 to 400 visitors a week was noticeable; today we can see upwards of 10,000 if several cruise ships arrive the same day. 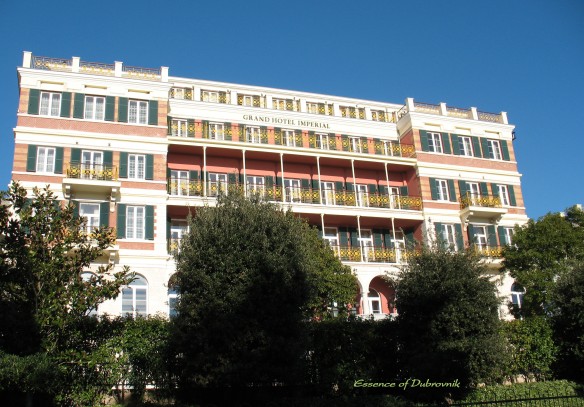 The hotel added a third floor in 1905; an annex was built in 1913 and another floor added in 1987, increasing the room count to 120.  Through the years, many notable guests have enjoyed the hospitality of the Imperial, with King Edward VIII and Wallis Simpson dancing in the gardens in 1936.  This was, and continues to be, one of the premium hotels in Dubrovnik.

During the 1991 Homeland war the hotel was a prime target for shelling despite the fact many refugees were being sheltered within.  During November 1991 large fires broke out and the worst attack was on 29 June 1992 when three refugees were killed and thirteen injured from shelling.  It was when reconstruction of the hotel began in 2001 that the owners decided to entrust the hotel management to Hilton.  Atlantska Plovidba, a Dubrovnik shipping firm, is the majority owner with Hilton International holding an 18% share.  Although the official name is the Hilton Imperial Hotel, the original name Grand Hotel Imperial remains on the front facade.    Locals refer to the hotel as The Imperial with no recognition of the Hilton affiliation. 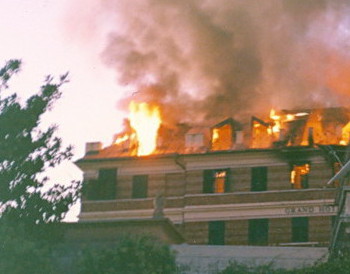 When visiting Dubrovnik in 1971 I spent many evenings enjoying the small casino, where I won and lost, but never large sums.  It was during this visit that I met Drago who made some incredible concoctions for me at the small casino bar.  We have enjoyed a long and valued friendship and these days one can enjoy Drago’s impeccable service at Komarda Konaba, my favorite restaurant.

The lavish Imperial garden is gone, replaced by a sublime terrace, a lovely spot to enjoy your drink of choice.  Sitting in the golden sun, sipping my leisurely morning coffee, I cannot help but reminisce about those early days of the elite as they strolled in lush garden. The history of the hotel is impressive and she will always remain the ‘Grand Dame of Dubrovnik’.

View from the upper level