The year is1928, my father has been living and working in the United States for the past 5 years.  He has saved enough money to return to his homeland for a bride.  “Tata” (father) makes contact with his cousin, Marija and she has found a lady who is the prospective blushing bride.  The lady lived in a small village called Orebic; it is located on the Peljesac peninsula about 2 hours north of Dubrovnik.

My Dad and cousin Marija travel from Dubrovnik to Orebic by ferry boat, arriving at the island of Korcula just across the channel.  They take the small rickety boat over to the village and spend the night with friends.  Tomorrow is the big day; my dad will meet the lady who has agreed to be his mail order bride.

During all my younger years I can’t remember my father ever looking anything but exceptional. He was very handsome man and took great pride in presenting himself in a proper, suit, tie, vest and a wonderful old Fedora hat. My sister used to say that he was “Dapper.”   He must have made the ladies of the village turn and admire this young man who had returned from America for a bride.  Off cousin Marija and father walk down to the part of the village known as Trstenik, this is at the far eastern end just above the most glorious beach to meet with the lady and her family.  This meeting required her parents, sisters and brothers, all cousins, aunts and uncles would be waiting to meet my father.  I never did hear very much about the meeting so I can’t tell you how it went inside.  However, I do know that once outside, the first words Dad said to Marija were that he did not like this woman at all and where there any other eligible ladies in this village?  This is where it begins to get exciting….

As they were just starting to stroll back to town, Marija began to ponder and mentioned to 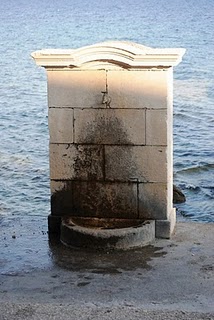 Dad that there were 2 sisters living just a couple of houses down from their exact location.  It was just as they had sat on the small perch across from the water fountain, that one of the sisters appeared barefoot with her ceramic water pitcher.  It was Tera, the middle daughter of Marija and Stepan Mrgudic, she was a tall auburn haired Dalmatian woman of 22 years.  Marija did the proper introductions and Tera and my dad talked for about ½ hour.  It was my Dad who uttered those famous words, “Joces li ti poc u Ameriku sa mnom?”  Translated it means, “Do you want to go to America with me?”  Now Tera thought very seriously about this question and answered with no hesitation with “Da.” That was how my dad met my mother, at the water fountain in Orebic.

Perhaps I should also explain why my mother had answered so quickly with an affirmative.  It seems that her father, a sea captain who was now sailing somewhere in Asia, had promised her to an elderly man of the village.  Well to say of the village would be a total understatement.  This man, who lived with his very cranky old mother, had a home half way up Sveti Ilija the mountain range just above mother’s village.  A marriage to this elderly man and his mother would mean that my mother would be expected to walk down to the center of town, every morning rain or shine, for bread and that days lunch – fish – meat or just vegetables at 6am.  She would then return up the mountain to begin cooking and serving lunch.  It would then be time for her to start to clean the very old house, which had no indoor plumbing let alone a bathroom.  And who else would have to shovel out the outhouse?  She knew that she would be the workhorse for the rest of her life and this was enough for her to say yes to my dad when he asked that very famous question.  My grandmother encouraged my mother, as did her sister to marry my dad as quickly as possible and begin her journey to the land known as America.  My grandfather was due to return shortly, my dad’s visa was almost over and it was now or never.

My mother and father went to the Catholic church in town, where they asked their family priest to post their all 3 of their bans on one Sunday and marry them the following Monday, which he did.  It was early October when they began their journey up the Dalmatian coast to Rijeka and onward to Cherbourg where they boarded the ship named “Barengaria” and the 7 night journey across the Atlantic began.  Mother spends 4 nights on Ellis Island before being allowed to enter the New York City.  She was quite ill prepared for her first sights of New York and can remember vividly when my Dad took her to see the movie “The Ten Commandments” which of course was the first one in black and white.  Mother had never seen a move, let alone been inside of a movie theater.

There were married for 58 years, my Dad passed away in 1986 and had told me for many, many years that his ashes should be scattered in mother’s village of Orebic, in “Nosa Mora” which means literally our water, aka Adriatic Sea.  I had wanted to bring my mothers ashes back to Croatia, but the bureaucracy and red tape made the task impossible.  Lake Tahoe was always our Mothers Day trip and she now rests in a meadow of wildflowers along with Norton and Trixie, the slippers…

7 thoughts on “How They Met”